The ground is the genetic potential of an individual (genotype), determined at the time of conception. It is expressed on a physical, energetic and psychic levels. The ground’s psychic aspect is the temperament or character, the energetic aspect is the humor or pneuma, and the physical aspect the constitution.

Character, pneuma and constitution are the three inborn and genetic components of Human being.

The genetic potential (genotype) will be expressed differently (phenotype) according to the context and life story, this is what we call epigenetic. What we are today is the perfect mix between our genetic ground and our life story. I often explain to my patients that the ground is like the rice grain, and the life context like the kind of soil, the amount of sunshine, the watering. It’s the combination of a grain type with the context in which it develops who will determine the beauty and the strength, or resistance capacities to the sheaf diseases.

According to traditional medicines, the vital energy or pneuma is the basis of the body/mind balance. If the pneuma is balanced we are in good health, if it’s unbalanced, we begin being sick.

As Greeks and oriental medicines, Hahnemann has a vitalistic conception of the human body.

“In the state of health the spirit-like vital force (dynamis) animating the material human organism reigns in supreme sovereignty. It maintaining the sensations and activities of all the parts of the living organism in a harmony that obliges wonderment. The reasoning spirit who inhabits the organism can thus freely use this healthy living instrument to reach the lofty goal of human existence.“Organon § 9

“When man falls ill it is at first only this self-sustaining spirit-like vital force (vital principle) everywhere present in the organism which is untuned by the dynamic a influence of the hostile disease agent. It is only this vital force thus untuned which brings about in the organism the disagreeable sensations and abnormal functions that we call disease. Being invisible, and recognizable solely by its effects on the organism, it can express itself and reveal its
untunement only by pathological manifestations in feeling and function (the only aspects of the organism accessible to the senses of the observer and the physician), i.e., disease symptoms.”. Organon § 11.

Dynamis, is Hahnemann’s word for vital energy. It is the exact equivalent of Galien’s pneuma, of Chinese’s Qi and Indian’s Prana.

When the vital energy (pneuma) is well tuned, the human being is healthy, when it’s untuned, he get sick.

According to traditional medicines, from the conception, Pneuma is subject to imbalance. This imbalance  is what homeopaths call psora, the susceptibility to chronic diseases.

Psora is an inborn unbalanced state of the vital energy, representing the basis of the susceptibility to chronic diseases.

This definition of psora has at least two advantages, the first one is to perfectly tune to Hahnemann’s psora description given in the “chronic diseases” and to the definition of diseases given in “Organon”, and the second is to get psora out of a pseudo-infectious definition.

Kapha (Phlegm), Pitta (Bile) et Vata (Wind) fit with the 3 galien’s pneuma aspects (nervous, vital and natural), and with the three Platonist sectors of the soul (respectively Logos, Thymos and Eros). For Platon, each part is ruled by a basic emotion: desire to Eros, anger to Thymos and Doubt to Logos. Ayurvedic medicines gives to each part an anatomic seat (that may vary with the authors).

The important thing to remember, is the existence of three « types » of psora characterized by somatic criteria for constitution, energy criteria for humor  and psychological criteria for mind.

Considering that psora is the potential to disorder of Pneuma, it is possible to quantify this disorder by its three components : wind, bile and phlegm.

At the moment of conception, each individual is wired with a specific “energy code”, based on the three humors previously seen. Each humor could be expressed with a specific state of quality and quantity, with a  dynamic interaction with the two others. In other words, we’ll be able to define, for each component, its imbalance in terms of quantity (plethora or deficiency) and quality (dyscrasia).

We can merely say that the three humors are like the three fundamentals colors, from which comes the wide  spectrum of colors that nature offers. 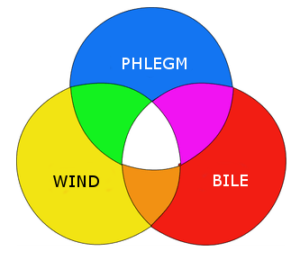 Each individual comes at conception with a certain energy code based on Phlegm/Bile/Wind with some dominance of one of them. 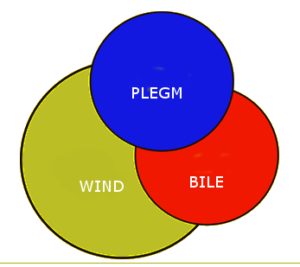 The enneagram based integrative typology model we use, describes for each humor, three unbalanced types (two in quantity, excess or lack, and one in quality) giving three imbalances for each humor, leading to the nine enneagram types (see our dedicated website for more information).

Psora is an inborn unbalanced state of the vital energy (pneuma), representing the basis for further chronic diseases. Psora is characterized by three components Wind, Bile and Phlegm whose respective proportions determine the energy code or the basic ground of an individual.