In traditional medicines, the knowledge of the constitution will allow to individualize a suitable therapy whether nutritional, psychological, medicinal or energetic. This individualization is inherent to these medicines, and no traditional practitioner could consider to determine a therapy without examination and diagnosis of the constitution. Yet it’s more or less what we are doing in homeopathy. Homeopaths base their diagnosis on the similitude between the symptoms of the patient and that of the remedies according to a local or global level of similar, but the constitution is almost never involved. I say almost because some homeopaths (mainly in France) sometimes use classifications such as Leon Vannier or Henri Bernard (carbonic, phosphoric and fluoric).

But in general, in homeopathy, the constitutional diagnosis as a main work method is by no way developed with a reliable and reproducible methodology that allow to work with all the remedies of the homeopathic materia medica. For a case of (constitutional) psora, the method proposed by Hahnemann is essentially based on a global similar (so-called level 2). However our materia medica has nearly 4000 remedies and to find the constitutional simillimum soon turns to be a very difficult task and is almost impossible. Because of that, the great homeopath, Pierre Schmidt liked to say that the majority of homeopaths work with maximum 100 remedies. In the same way, Alfonso Mazi said that only 5 % of patients have their true simillimum.

Contemporary homeopaths have begun to remedy this difficulty working on the structure of the materia medica. The first step was by giving criteria to differentiate patients constitutionally affected by the mineral , plant or animal Kingdom, and then giving specific features to the different taxonomic families. We will quote as an example the work of Jan Scholten on the periodic table of the elements or his new work on plant taxonomy. Rajan Sankaran has also his classification based on his own understanding of miasms.

It should yet be noted that there is a lot of confusion about what the word miasm means (see this page for clarification). Most contemporary homeopaths understand the word miasm in the sense of an existential issue. On the contrary, our very extensive practice of the tick-borne diseases, confirms the Hahnemannian understanding of the word miasm in its basic infectious sense (except for the psora). This, therefore, puts some confusion in the profession. What Sankaran means by his “miasms” corresponds to existential problems, which according to our understanding are more characterizations of the primary psora. For more detail on this interesting topic see our page on infectious miasms.

For that, we need to make a differential diagnosis, in order to exclude diseases that are not psoric :

Here is two quotes of the Organon to demonstrate that for Hahnemann psoric diseases and venereal diseases (that we need to understand to a larger extent of infectious) are actually to be distinguished.

“In non-venereal chronic diseases, therefore those most usually arising from psora, one often needs to use several anti-psoric remedies in succession to bring about a cure, each to be chosen because it is homoeopathic to the group of symptoms remaining after the previous one has completed its action.“. § Organon 171

“In chronic local diseases that are not obviously venereal, the anti-psoric internal cure is in any case primarily what is required.”. Organon § 195

Having excluded the circumstantial, iatrogenic and infectious chronic diseases , we face the vast field of chronic constitutional diseases, that Hahnemann called “psoric”.

If we can categorize a person by a constitutional energy code as we have seen (here), it is logically possible to categorize in the same way a natural substance. So, according to our observations, Sulfur presents an energy code dominated by Wind/Vata and more particularly an excess of Wind/Vata (type 7 in the enneagram). Another energy parameter has been added to the three humors described by Galen and the Ayurveda, the three mineral, plant and animal kingdoms.  So like an abscissa and an ordinate, the energy code of an individual can be characterized by a dominant humor (Wind, Bile and Phlegm) and a dominant kingdom (mineral, plant, animal). 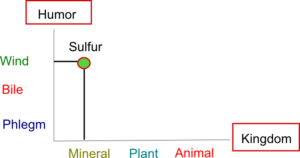 In this diagram, you can observe the simplified “code” of Sulfur which is :

Thus the constitutional energy code of Sulfur -Wind/Mineral- must fit, according to the constitutional similar law, to an individual that have the same energy code -Wind/Mineral-. Our observations conducted on thousands of clinical cases allows us to confirm our initial hypothesis: every patient can be characterized by a double entry: humor/kingdom, in the same way that each natural substance.

So, for a homeopathic remedy to be able to unroot the primary psora and balance the vital energy (pneuma), the remedy (simillimum) must be similar in term of humor and of kingdom to those of the sick person. This is called the constitutional similar.

In other words, even if two remedies have similar symptoms (on a superficial level), deep symptoms need to fit with the energy of the constitution in order to be really effective and curative. Otherwise, it will be called a simile and will only make a palliation.

The new strategy for choosing the right remedy (the most similar remedy or simillimum) will be to first determinate which kind of constitution the patient belongs to (his energy code), and then to look for the remedies that have the same energy code.

This allows in a relatively easy way to work with a notably larger amount of remedies, of course, if one is able to master the knowledge of the constitutional diagnosis.