The systemic typology model describes the varieties of the human phenotypes.

By shortcut and in the interest of simplification we consider constitution and phenotype as two interchangeable terms.

Systemic Typology Model is a new and transdisciplinary model of human typology that works with various complex typological and mythological systems. Each of them expresses complementary and interdependent fields of human being.

What is characteristic of our work is that we found a universal structure behind all the typologies that we call the Universal Matrix. This Universal Matrix is systemic in the sense that all parts of its structure are inter-connected with the others in a dynamic way. 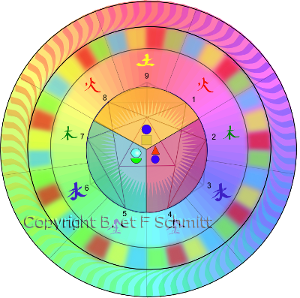 This model was initially discovered by an homeopath (the author of this site) for his homeopathic practice and it’s in this frame that it will be presented on this website. For more information on this model you can see our dedicated site and our facebook group.

At the basis of this model is enneagram but for different reasons we decided to put this name in brackets for at least two reasons.  At first, we are now very far from the initial model although the initial model is right and secondly we almost never agree with most of the typing in other enneagram schools. The problem is not as some says that one shouldn’t type anybody and that it’s to everybody to type oneself (although in practice whose who says not to type their students, are notoriously trigger-happy typers…), but rather it’s better not to type if one doesn’t have the competence to do that.

For our medical purpose, not only we say that we type but we really type every patient for our medical homeopathic needs. That doesn’t mean that we communicate to our patient their type (in fact we never give it), but it’s simply our medical routine to find the simillimum, the most similar remedy.

Not only we type, but we learn our homeopathic students how to type. I will even say that typing is our specialty. And for that, we have a reliable and reproducible methodology, based on scientist criteria.

According to a logical analysis of Samuel Hahnemann’s work, the psora is the phenotype.  The Systemic Typology Model describes the whole range of human phenotypes and so allows to characterize the psora.

According to all traditional medicines (both eastern and western), a taxonomy of phenotypes or types of constitution can be defined and diagnosed. The interest of this classification is actually to give tools for therapeutic. Indeed, each type of constitution present a set of characters, including physiological weaknesses for which specific therapeutics will be used. Until now, there was not such a classification of constitutions in homeopathy. Our work comes then to deepen the work of Hahnemann on psora in order to apply the new level of psoric or constitutional similar.

So for each type of constitution (each type of psora), we can find a set of specific homeopathic remedies. It’s easy to imagine that it incredibly facilitates the work of the homeopath. Instead of searching one single remedy amongst 4000 (like looking for a needle in a haystack), he will first characterize the type of constitution, and then limit his choice only to the remedies that belong to the constitution. It’s mathematical.